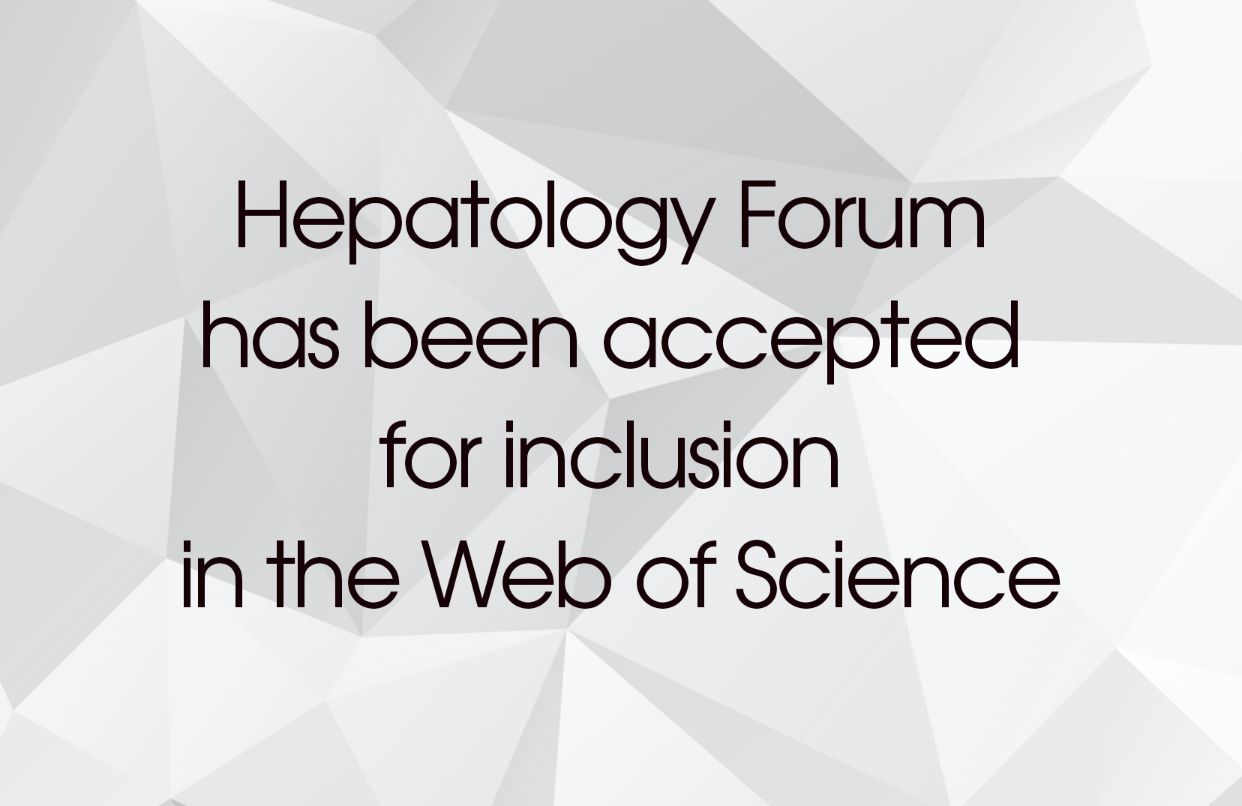 Background and Aim: The present study aims to investigate the role of genetic variability of the PNPLA3 gene (adiponectin) in predisposition to non-alcoholic fatty liver disease (NAFLD) by comparing NAFLD patients to healthy controls and to investigate any impact of the PNPLA3 genetic variability on the natural course of the disease.
Material and Methods: This cohort consisted of 174 patients with biopsy-proven NAFLD and 151 healthy controls. DNA was extracted from peripheral blood and the rs738409 C>G single nucleotide polymorphism was assessed using PCR-DNA sequencing.
Results: The frequency distribution of the GG genotype was significantly higher in NAFLD patients than in controls (p=0.01). In patients with NAFLD, the GG genotype was associated with lower platelet counts (p=0.001), the presence of steatohepatitis (p=0.04) and hepatic fibrosis (p=0.016). After adjustment for age, gender, obesity, and diabetes mellitus, the GG genotype was an independent predictor of significant hepatic fibrosis (adjusted odds ratio =3.031 p=0.012). From the baseline to sequential liver biopsies, the progression of NAS in NAFLD patients was slightly higher in the GG genotype than that of CC and GG genotypes (p=0.18).
Conclusion: The PNPLA3 GG genotype is a predisposing factor for the development of hepatic steatosis in NAFLD patients and related to a more severe liver disease.

Nonalcoholic fatty liver disease (NAFLD) is one of the most common liver disorders worldwide.[1–4] NAFLD is the spectrum of liver disease ranging from hepatic steatosis to non-alcoholic steatohepatitis (NASH), hepatic fibrosis, cirrhosis and liver cancer.[1–4] NAFLD affects approximately 25% of the general population.[5,6] Obesity, diabetes, race, ethnic differences and genetic predispositions affect its prevalence and natural course of the disease.[5–8] The prevalence of NAFLD has increased gradually during the past two decades.[6] The increasing prevalence of obesity, DM, and associated metabolic syndromes increases the risk of NAFLD-related cirrhosis.[6] In Turkey, the prevalence of obesity was 36%.[7] Previous studies reported that the NAFLD prevalence in Turkey is around 10.6%–23.2%;[9] however, no reliable data regarding the prevalence of NAFLD are available.

Patatin-like phospholipase domain-containing (PNPLA) proteins, a mammalian family of lipid hydrolase, are members of the patatin family.[10–12] The human genome expresses nine PNPLA proteins (PNPLA1-9), which serve critical roles in lipid metabolism and its signaling, and the maintenance of membrane integrity, and regulation of energy metabolism.[10–13] PNPLA3, as adiponutrin, is expressed mainly in the liver and adipose tissues of humans. Mammalian nutritional status regulates the hepatic expression of the protein both at the transcriptional and post-translational levels.[11–14] During fasting, hepatic PNLPA3 mRNA levels are low; however, they increase after carbohydrate feeding.[14] The biochemical function of the PNPLA3 remains not well understood. PNLPA3 plays a role in the hydrolysis of glycerolipids and has lipase activity against triglycerides.[10–14] The nonsynonymous mutation (I148M) of this gene causes a loss of function that predisposes to steatosis as a result of decreased triglyceride hydrolysis in hepatocytes.[11–13] Several groups reported a mutation in the PNPLA3 gene (adiponutrin, rs738409 C>G) encoding isoleucine to methionine substitution at the 148 position that is associated with the prevalence and severity of NAFLD and alcoholic liver disease, and chronic hepatitis, fibrosis, and cirrhosis and its complications included hepatocellular carcinoma.[15–20]

Between May 2010 and February 2014, 174 DNA samples of consecutive patients with NAFLD, who were seen in the Ankara University School of Medicine, Department of Gastroenterology, Liver Diseases Outpatient Clinic, were analyzed. Diagnosis of NAFLD in each case was based on biochemical, radiological and histological criteria. Criteria for inclusion were: 1) age >16 years; 2) convincing evidence of absent or minimal alcohol consumption: <20 g alcohol/day for women and <30 g alcohol/day for men; 3) absence of confounding disease, including acute and/or chronic viral hepatitis (hepatitis A, B or C); and 4) exclusion of other forms of liver disease, including autoimmune, drug-induced and metabolic liver diseases. Data were obtained from patient visit charts. Population control samples were from 151 healthy individuals who had no evidence of liver disease or any other disease, no alcohol abuse. Controls with high body mass index (BMI, >25 kg/m2) and an abnormal abdominal sonographic pattern were excluded from this study.

Liver biopsy was performed in patients with normal and abnormal serum aminotransferases levels having an abnormal sonographic pattern as increased liver parenchyma echogenicity. All liver biopsy specimens were retrieved from the archives of the Department of Pathology, Ankara University School of Medicine. Liver biopsy material was mounted on archival slides originally prepared from 10% formalin-fixed paraffin-embedded tissue and stained with hematoxylin-eosin and with Masson’s trichrome stain to evaluate the fibrosis. The liver biopsy specimens were evaluated by one pathologist (BS), who has blinded to the clinical and biochemical data. Histological features of the samples were interpreted based on the criteria of Kleiner et al.[21] Hepatic steatosis was classified from grade 0 to grade 3: Minimal steatosis, grade 0, was defined as <5% steatosis; mild steatosis, grade 1 as 5–33%; moderate steatosis, grade 2, as 33%–66%; and severe steatosis, grade 3, as >66%. Necroinflammation, either lobular or portal, was graded. Fibrosis was scored from 0 to 4 and significant fibrosis was defined as stage 2 to 4 fibrosis. NAFLD Activity Score (NAS) (0–8) was calculated based on the grade of steatosis (0–3), lobular inflammation (0–3), and ballooning (0–2).[21] NASH was defined as patients with NAS ≥5, while patients with NAS <3 were diagnosed as not-NASH.[21]

Genomic DNA samples were extracted from peripheral blood leukocytes using the high salt concentration method.[22] Genomic DNA was amplified by PCR using the primers: 5′-GAGGGTGTATGTTAGTTCCCCGT-3′ and 5′-AGCACACTTCAGAGGCCCC-3′ to detect the adiponutrin/PNPLA3 rs738409 C→G SNP, encoding I148M. The PCR conditions were composed of initial denaturation step at 95°C for five minutes (min) followed by 30 cycles of denaturation at 95°C for one min, annealing at 62°C for one min and extension at 72°C for one min, followed by a final step at 72°C for seven min. Subsequent analyses were performed using the BigDye Terminator v3.1 cycle sequencing system (PE Applied Biosystems, Foster City, CA, USA). After amplification, the cycle-sequencing products were purified by sodium acetate–ethanol precipitation. The purified products were then analyzed using an ABI 3100 genetic analyzer (Perkin Elmer, Foster City, CA, USA).

BMI was calculated as weight in kilograms divided by height in meters squared. Obesity was defined based on the World Health Organization criteria with a BMI of 25–29.9 kg/m2 defining overweight and BMI ≥30 kg/m2 defining obesity.[23] IR was calculated on the basis of fasting plasma glucose and insulin values using the homeostasis model assessment-insulin resistance method (HOMA-IR: plasma glucose (mg/dL) x insulin (µu/ml)/405).[24]

After the diagnosis of NAFLD was confirmed, the management was focused in the following areas: the establishment of an appropriate diet, including a conventional diet of 25 kcal/kg x ideal body weight (kg) with three meals per day containing 60% carbohydrate, 25% fat and 15% protein and an exercise program, including walking (initially as 300 steps per day for three days, thereafter adding 500 steps at 3-day intervals until a level of 10000 steps was attained) and/or jogging (20 minutes twice a day);[25,26] improvement in associated conditions, such as diabetes mellitus, IR, and moderate/severe hyperlipidemia; and discontinuation of potentially hepatotoxic drugs, such as herbal medicine. The dietitian interviewed all subjects, and the same diet and exercise program was suggested. The dietitian and one of the authors monitored patient compliance with the diet and exercise program during the follow-up period using verbal communication.

All subjects were seen in the fourth week and in three or six-month intervals thereafter in the Outpatient Clinic. Laboratory tests were performed during the follow-up period. Second liver biopsy was optional and was performed after one year of the follow-up period for the evaluation of the liver histology and treatment effect when the patient was accepted.

Categorical variables were evaluated using Chi-square test or Fisher’s exact test, where applicable. Differences among the groups for baseline clinical and laboratory characteristics were evaluated using Kruskal-Wallis variance analysis. When there were two groups, the Mann-Whitney U test was used. To define risk factors of the outcome variable (steatosis, NASH), multiple logistic regression analysis was used. SPSS for Windows 11.5 was used for statistical analysis. P-value less than 0.05 was considered significant.

Association with Clinical and Biochemical Parameters

The GG genotype represents a loss of function of adiponutrin, which causes failure in the breakdown of triglycerides during hyperinsulinemic states.[11–14] The reported data regarding the association between the GG genotype and abnormalities in biochemical parameters, including BMI, hypertriglyceridemia and elevated serum aminotransferases levels in NAFLD patients are conflicting. Some data were able to confirm these findings,[13,15,27–31] but other data were unable.[17,29,30,32,33] Romeo et al.[15] found a significantly increased hepatic triglyceride content in individuals with GG genotype. Kollerits et al.[13] reported a significant association of the GG genotype with serum total cholesterol, non-high-density lipoprotein and low-density lipoprotein levels and suggested that adiponutrin might disturb lipid metabolism. Interestingly, in contrast to these findings, other studies[17,29,32,33] demonstrated the dissociation among the GG genotype, gender and metabolic abnormalities, including obesity, fasting glucose, insulin levels, IR and hypertriglyceridemia in NAFLD patients. In the present study, among the patients’ characteristics, the GG genotype was only significantly associated with low platelet counts in patients with NAFLD (p=0.001). This discrepancy may explain the differences between the recruited patients in various studies.

Advanced age (>50 years), male gender, obesity, diabetes mellitus and hepatic necroinflammation have been identified previously as predictive factors associated with the severity of fibrosis and progression of disease in patients with NAFLD.[2,38,39] Grimaudo et al.[20] reported that NAFLD patients carrying PNPLA3 rs738409 G>C variant are at higher risk of liver-related events and death. In the present study, from baseline to second liver biopsies, the progression of NAS slightly higher in NAFLD patients with GG genotype than those of CC and GG genotypes (p=0.18). However, no significant differences were observed in NASH patients (p>0.05). This result indicates that a lack of association between the GG genotype of the PNPLA3 gene and disease progression in NAFLD patients. Several other factors, such as advanced age, obesity, alcohol intake, insulin resistance and diabetes, are also exit in the disease progression.

In conclusion, the PNPLA3 GG genotype is a predisposing factor for the development of hepatic steatosis in NAFLD patients and related to a more severe liver disease. GG genotype is one of the predictive factors for disease progression.